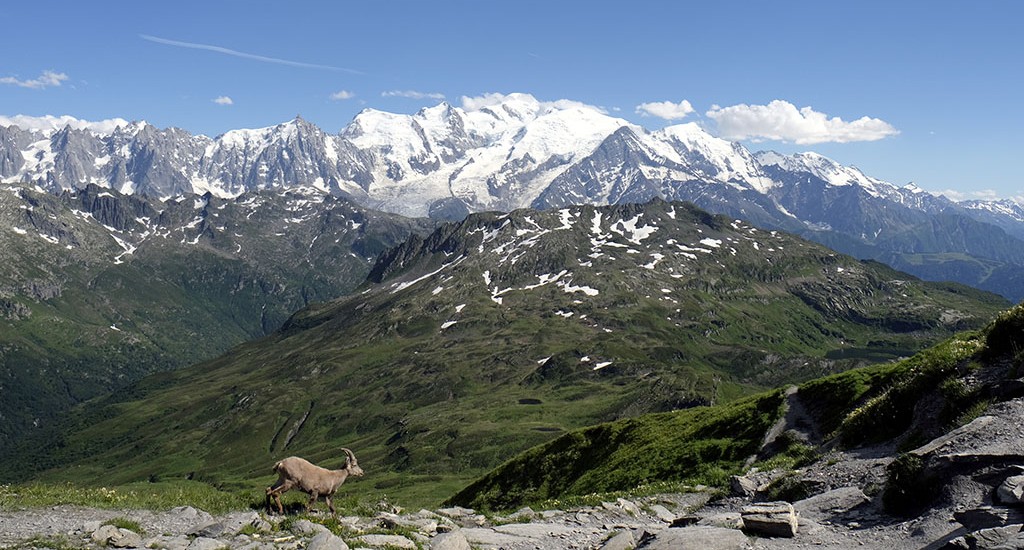 This article documents the GTA (Grande Traversée des Alpes) via the so-called “classic and integral” route from Lake Geneva (Saint Gingolph in Switzerland) to Nice, which only and strictly follows the GR5.

This great crossing was for me, a hyphen which connects massifs already visited; Mont-Blanc, Beaufortain, Vanoise, Queyras, Mercantour, …

To the classic GTA-GR5 route, I added 3 variants, for fun:

This crossing was done in semi-autonomy (refueling every 2-4 days) and essentially solo except for a day and a half during which my son Simon joined me and captured images with a drone.

As I say in the video, “Coming out of confinement in July 2020, after 4 months of excessive stress, I felt an immense need for disconnection, nature and solitude. For a long time I had the idea of draw the link between these massifs already visited; Mont-Blanc, Vanoise, Queyra, Mercantour, … The Grande Traversée des Alpes is extraordinary.”

My immense need for disconnection, nature and solitude was largely satisfied and even beyond my expectations.

Loneliness was chosen and not suffered, moreover I was regularly in touch with my loved ones. As Bruno Perrier says in the video, solitude allows for very pleasant meditative moments. In addition, solitude allows great attention and concentration on the present moment offered by the mountain.

I lived these 3 weeks (in two “seasons”) in deep immersion with all the components of the mountain and the senses very attentive to the environment.

The visual memories come first with landscapes that are both varied and grandiose, the view of the Mont-Blanc massif from the Col d’Anterne is undoubtedly the most majestic and most spectacular. I stopped there for a long time to taste the pleasure of this view so wide on the northern view of the massif and the Mont-Blanc dominating in its center.

During these periods of July, the smells were very present whether they were flowers, especially those of Queyras, pastoral work such as haymaking, or the hinterland of Nice at the end of the crossing.

I was very attentive to the sounds of the mountain, the insects and birds, the streams and torrents, the wind and the rain, the storms, … constitute as many indications on the environment, life and on the mountain. These noises inform the walker who is always more or less on the lookout. I loved reading the landscape in the light of these sounds so rich in diversity and intensity.

Even if I crossed many marmots and a lot of ibexes, the fauna was left to be desired, whether it be, for example, large birds of prey or chamois.

The presence of hikers is very variable, on the common part with the Tour du Mont-Blanc, it is too dense for me and I would almost become a misanthrope. On the other hand in Ubaye, I had to spend a full day meeting only 2-3 people. The exchange with the mountain people who live and work is easy and pleasant, the walker, especially when he is alone, receives a very warm welcome and the conversation starts easily. The long exchange with Rémy Soulas, shepherd, (see the video) was a high point, one of those moments that warms the heart.

The meeting of GTAists and often the occasion of a beautiful exchange, see to be convinced of it the interview of Bruno Perrier who has very right words on the solitary walk.

Physically, the walk was pleasant even if beyond days at 1800 / 2000 m. of positive elevation, the body no longer responds as well. For the two “seasons”, the marathon training and the additional preparation for walking allowed me to extend the walks late into the evening. Autonomy also allowed me to adjust the end of each stage to the best compromise between the level of fatigue and the quality of the environment of the stage.

The GR5 does not present any difficulty in orientation, and I hardly had to consult the 4 topo-guides purchased and taken with me in digital version (tedious work carried out by my wife).

The IGN iPhiGéNie application which embeds all the layers of maps of France with cadastral surveys and images satellites, allowed me to verify that I was where I thought I was. It is a very powerful tool and very economical in battery if you take care to download the maps before departure.

I didn’t upload any traces to my app, I didn’t want to spend my time glued to my app making sure I was in the right place. On several occasions I made a mistake, most often through inattention: discussion with a hiker, immersed in thoughts, misinterpretation of markup, …

On the other hand, I created a track of my crossing with my Garmin Forerunner 935 watch. In addition to the track, the associated application provides a lot of data collected during the walk (see the table of this track below).

The path offers great diversity in a classic cycle of the stages of the mountain (from top to bottom): 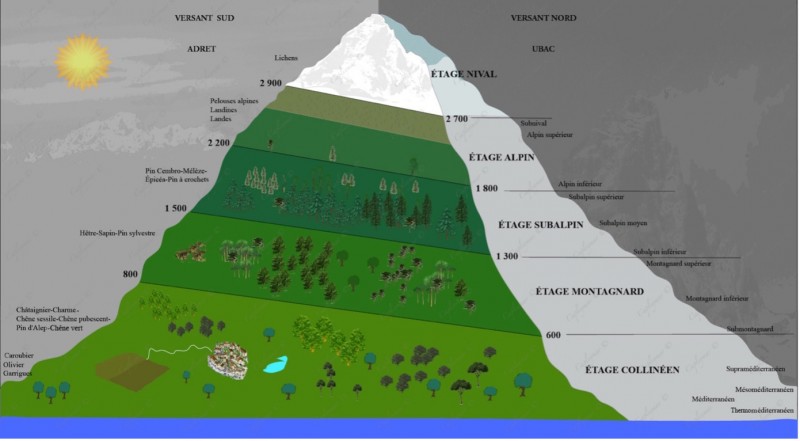 The video makes extensive reference to the many passes that punctuate the days.

Haute-Savoie is very inhabited, Vanoise is a magnificent setting, I love Queyras, Ubaye is very calm, Mercantour is demanding and the hinterland of Nice is steeper than I had expected. The nature reserves or national parks: Aiguilles Rouge, Contamines-Montjoie, Vanoise, Mercantour, … are a blessing. Winter sports resorts, even if I am a fan, are like a scarification of the natural environment (eg the passage through Tignes).

I took great pleasure in choosing the highest bivouac site allowed by the morphology of the terrain and my ability to access it at the end of the day, the stage at Lac Saint-Anne is a very good example of this. an exceptional evening.

The accommodation is distributed as follows:

The nights under the stars have of course given me the best feelings. The celestial vault is superb, sometimes even worryingly dense. The (frequent) awakenings in the middle of the night are always magical moments.

The table of stages is “raw”, it is mainly the data provided by the Garmin watch in “Hiking” reading that I started during the first step in the morning and that I stopped in the evening at the stage.

It is important to note that I did not cut through the GR55 in the Vanoise, which is what many hikers who do the GTA do but not by the “classic” GR5 route. This shortcut saves them about 2 days of walking. The so-called classic GTA-GR5 route (see the trek magazine article) goes through Tignes then Val d’Isère and then goes up in the Vanoise to the north (Refuge du Plan du Lac) to go down again to the south (Refuge de l’Arpont ) this North-South descent is sublime. 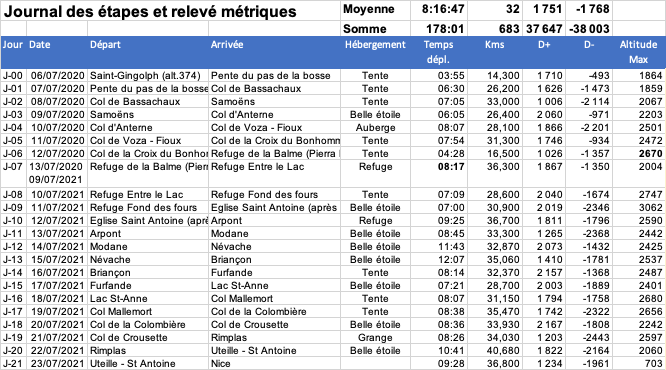 Everyone will be able to estimate how they are based on these walking charts, taking into account: a well-marked path, regular breaks, long walks at a fairly slow pace on the ascent and fast on the flats and descent, equipment allowing autonomy (sleeping, food, water, …), photo and video equipment (more than 100 video shots over the entire crossing) and a walker who is approaching 60 years old.

It should be noted that some stages were really long; 12:07 of effective walking to which are added the break times, video recordings, preparation for departure and evening bivouac.

Days that accumulate altitude difference (D+) greater than 2000 m. and more than 30 kms are demanding.

Finally, the least comfortable stage was J-19 with a negative elevation of 2443 m. which caused me a tibial periostitis which made me suffer until the arrival in Nice.

NB: the GPX tracks of each stage are available on request.

The photo below gives a complete view of the equipment: 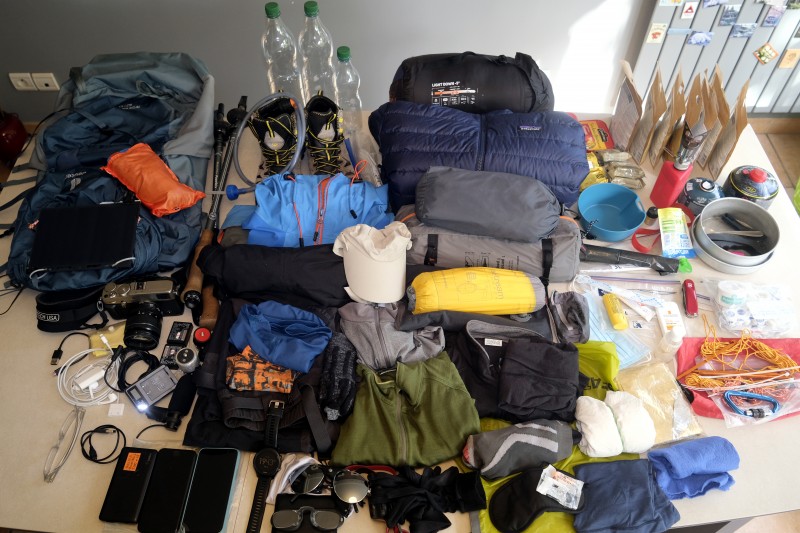 Some opinions and feedback